We won a Gerald Loeb Award for Distinguished Business and Financial Journalism in the Television Breaking News Category for our coverage of the Bernie Madoff Scandal in 2010.

My contribution to our team was multifaceted:

When the Bernie Madoff Ponzi scheme scandal broke in December 2008, our team put together what we called an insta-special. Within a few short days, we gathered material for an hour-long taped program. I worked with Reporter Mary Thompson to compile the components for her report including coordinating crews in Boston to do a speakerphone interview. I tape produced that piece—an updated version of that report follows—as well as Senior Correspondent Scott Cohn’s package for the special.

Every time Bernie Madoff had a court appearance, we covered the day’s developments. I often served as on-site field producer, either outside the courtroom or at Madoff’s apartment, coordinating live hits between the newsdesk and show producers back at headquarters, and our team on the ground.

We had several different objectives on the day Madoff was convicted. Not only did we provide comprehensive live updates of the proceedings, we also planned a formal interview with Mary Thompson and several people hurt by Madoff’s fraud. I became more of an air traffic controller that day, working with the victims and our car company to get them safely from the circus outside the courtroom to another location for that interview. Nine people trusted us to share their story. Click the image below to be redirected to cnbc.com to watch the complete interview. 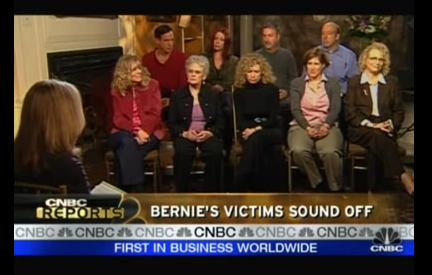